You can reach me at KatieAshleyRomance at gmail dot com

Katie Ashley
Atlanta, GA, United States
I am the New York Times, USA Today, and Amazon Best Selling author of The Proposition, Proposal, Music of the Heart, and Nets and Lies. I am represented by Jane Dystel of Dystel and Goderich for all books except for Proposition and Proposal.

3:00 AM | Posted by Katie Ashley | Edit Post
Today on the blog I'm featuring author JB McGee of Broken. I'm so excited that she is a fellow Georgia gal, and I'll be meeting up with her and Michelle from Literati Literature Reviews on Saturday night!!


Here's a summary of her debut novel: 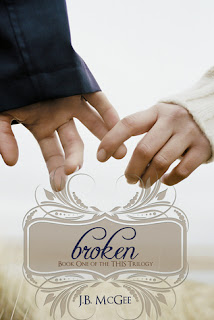 Gabby's life has been anything but easy. She is surrounded by friends who seem to have everything she doesn't: money, social standing, and happily married parents. While dealing with the loss of her mother, she experiences her first heartbreak. She commits herself to her studies and runs away from any emotions that aren't safe. Bradley Banks, a confident CEO and commercial architect, who has long time commitment issues forces Gabby to feel again, but will he be her next heartbreak?


What would be a typical working day for you? When and where do you write?

I have special needs children so my life is crazy and my schedule must be flexible. Sometimes they are in school and other times they are too sick to go to school. Being five and seven year old boys, when they are here, it is very difficult to write. Those days I spend my time being a referee for the most part. However, I am a bit of a workaholic. If I am unable to write and I'm not breaking up a fight, you'll find me marketing the book or myself in some way. I am also a graphic designer, so I am usually designing for clients during the weekdays, as well.

When I wrote Broken, my boys were actually well enough to attend school three days a week for about four hours a day. I was able to write during those times. When they came home, they were exhausted and would take naps, and so I would continue writing. I'd stop when they woke up and then start back again as soon as they were in bed. I had the story for Broken written in two weeks. Now that they aren't in school like that, I find now that the library is my best friend. Anytime my husband will keep them for me to go, I'm out of the door before he changes his mind. I go to the quiet room there, put my headphones in and the creative juices start to flow.

What is the hardest part of writing for you?

One word: starting! When I decided to write Broken, I did some research and then made an outline. But, even with the outline, I still struggled with how to start my first sentence. I just had no clue how to even begin. I finally just typed something out with the thought that I could always change it after I started if I didn't like it, which is exactly what I did. My first sentence for Broken initially was the start of the wedding, but a beta reader told me to go back and add more of Sam and Gabby leading up to that scene. I did that and I think it worked out quite nicely. I would tell anyone who wants to write to do just that. Even if it's just a sentence. Sentences become paragraphs. Paragraphs become chapters. And before you know it, you'll have a novel. And on a tangent, sometimes outlines don't work. If I showed you my outline, you would be very confused. My imagination totally went crazy and what I had planned to write is not what my mind decided to have me type.

When and why did you first start writing?

When I was in the seventh grade, I was told I could no longer do my book reports on Nancy Drew. It was tragic. This was the beginning of reading being a chore and not a passion. After that, I hated English and I really didn't read unless I absolutely had to read.

I love Nicolas Sparks and read his books. I also loved the Left Behind Series. But, really other than those books, I wasn't a reader. My husband asked me in college why I even bothered wasting money on text books if I was never going to open them. I would laugh and say because I do open them in class to make my professors think I study. But, I was notorious for skimming books right before a test or reading on the internet what a story was about enough to wing it. I would pay attention in class and then look at the excerpts that were being discussed and I'd get involved in the conversation as best as I could. By the time the test came, I usually knew as much about the book having not read as my peers who had read it.

Why am I telling you all of this? Because I am the last person who thought I would ever be an avid reader, let alone a writer.

In my children's lit class my professor told me that I was going to be an author. She said "One day you're going to send me an email and tell me you've written a book and I'm going to be so proud." I laughed and said okay, but I was really thinking this woman is crazy. I was honored on the one hand, but I could not picture myself writing anything other than something I was forced to write for a good grade. And I hated that so much, I would procrastinate until the very last minute to actually sit down and write it.

I also had a dear friend, Jan Gambino, who helped me on my journey as a special needs mother. Jan told me that one day I'd write a book about our own journey, as it is certainly a unique situation with all of us having Mitochondrial Disease ("Mito"). I had blogged from the moment I found out I was pregnant with my first child (after years of infertility, not so unique). Jan would tell me those blog posts would become my chapters, to keep writing. She passed away last year and I kick myself for not writing sooner so I could have had her help and friendship along the journey.

So, it seems everyone else believed in me, but I didn't believe in myself. It wasn't until I read Fifty Shades of Grey and became obsessed with that story that my passion for reading, which had been lost in the seventh grade, came flooding back to me. After reading about six different books, most from initially self-published authors, I realized that I had a story in my head. I love a challenge, but I also feared having severe ADHD in addition to Mito that I would find myself halfway through and not finish for lack of attention or because my body decided to go on strike.

I made up my mind I was going to do it. I asked my husband if he would be upset if I wrote a romance novel that might have some erotica in it. I told him I'd use a pen name. He said he didn't care. So, on August 12, 2012, I started to write Broken. I decided a short story or novella might be a good start, rather than a novel. Initially, I thought of those papers I had dreaded writing and how the thought of a 400 word paper would send me into a panic attack. The thought of writing even 5,000 words was overwhelming. So, my first goal was that, 5,000. I think I had that many words in a couple of days. So, then I moved my goal up to 10,000 words. That's when I told my family if I could make it to 20,000 words, even if I didn't finish it, I would feel like I had really accomplished something. But, by the time I got to 20,000 words, my story was really getting juicy and I realized I couldn't just stop. Not to mention, I had beta-readers begging for more chapters. So, I made it to around 46,000 words and as much as I wanted to add more to get to novel length, I just didn't feel I could add words that progressed the plot.

One of the first things I did was send a copy to my children's lit professor. It was a really awesome moment for me. A couple of weeks ago I wrote my first children's book and sent her that, too. After I write the trilogy, the next book will be about my life. It will be for and because of Jan. It will be a legacy for my children and hopefully help other families the way Jan helped us. I am a writer. I think I always have been a storyteller. It just took a series of events and a few people to help me believe in me to make me realize it.

How did you come up with the idea of your book?

I thought, well this happened in my life, and I bet people would think that was juicy. I'll just take this one little event, and I'll twist the heck out of it and make it fiction. That's how it started. Like I said, I made this outline and it's nothing like what I actually wrote. When I finished chapter one and thought, Uh oh! Where do I go now, I decided I wanted to do a past/present format. So, I really ended up coming up with two stories and putting them into one. I knew that if my readers were left hanging in chapter one wanting to know what happened next, but they had to flash back, they'd keep reading chapter two to get to chapter three. Then, I hoped by the time they got to chapter three, they would have to have chapter four.

What are you currently reading?

I'm reading Binder Full of Women (Billionaire Binder Series). I saw it on a friend's wall, as she had posted it as a political joke. I decided since the first book was free, I'd download and read it. The timing is great since election day has just passed. Obviously, the book's binder full of women is not the same binder the politician's are discussing. :)

*Thanks so much for the interview, and I wish you the best of luck, JB!!
--