You can reach me at KatieAshleyRomance at gmail dot com

Katie Ashley
Atlanta, GA, United States
I am the New York Times, USA Today, and Amazon Best Selling author of The Proposition, Proposal, Music of the Heart, and Nets and Lies. I am represented by Jane Dystel of Dystel and Goderich for all books except for Proposition and Proposal.

Blurb for The Pairing along with a teaser with Aidan Fitzgerald stealing the show! 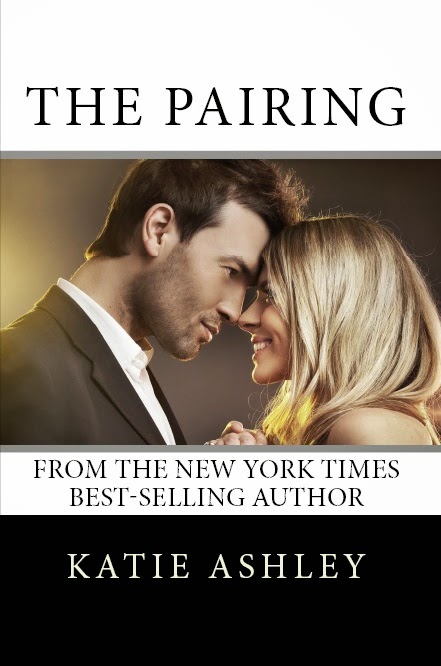 So originally I planned to release The Pairing last winter. Yeah, I suck epically. But what really happened is before I could sit down and start writing Pesh and Megan's story, this hot rocker and his crew invaded my mind. Well, actually, they'd invaded my mind back in November 2012. I had 11K words on Music of the Heart when The Proposal came out. I had every good intention of doing The Pairing when I finished Music of the Heart, and then there was Mr. AJ Resendiz to contend with...you can imagine how easy he is to persuade you to abandon a story to write his own.

But now it is time for Pesh to finally get his happily ever after. Whether you loved him, hated him, or wanted him to sleep with the fishes in the Proposal, he's falling in love for real with Aidan's niece, Megan. We didn't actually get to meet her in The Proposition--we just met her adorable son, Mason, when Emma was taking care of him and Aidan came home unexpectedly. You do get to spend time with her in The Party, the free novella of how Aidan and Emma met.

So here is the blurb for the book:

After her former boyfriend left her pregnant and alone, Megan McKenzie swore off men. She spent the last eighteen months focused solely on her son, Mason, along with finishing nursing school at the top of her class. Although she’s not ready to complicate her life with a long-term relationship, a nice no-strings attached hook-up is just what she needs. At her godson, Noah’s, baptism, she finds the perfect candidate in the soft-spoken godfather, Pesh Nadeen. After all, the widower could use a good time too. But after drinking too much, the night doesn’t end the way she thought it would. Forced to leave Pesh’s house through a walk of shame, Megan hopes to never, ever see him again.
For Pesh Nadeen, the very sight of Megan sends him into an emotional tailspin. Since she reminds him too much of what he has lost, he wants to be out of her sight…at first. But the more he gets to know her, there's something about the diminutive blonde that causes his protective side to go into overdrive, and he finds himself wanting more. When Megan is assigned to him to complete her nursing clinicals, he sees it as fate, but she’s having no part of it. She only wants a physical relationship while he wants far more.
What happens next is a sexy game of cat and mouse to see who will break first or if both of them will eventually get more than they ever bargained for.


“So will you have dinner with me?” Pesh leaned forward expectantly as Megan opened her

mouth. They were interrupted by the sound of Emma’s voice. “Oh thank God. I’m so glad you

two are on shift today.”
Her anxious tone was the only thing that could have torn Pesh’s attention away from Megan. He

glanced from Emma to Aidan, who was grimacing and rubbing his head. “What happened?”

Emma replied, “He fell and hit his head,” at the same time Aidan grunted, “Nothing.”

Megan stepped forward and went over to Aidan. She gasped as she surveyed him. “Ankle,

your pupils are huge!”

Pesh took his penlight out of his coat pocket and went to Aidan. As he flashed the light into

Aidan’s eyes, he grimaced. “Yeah, they are. What exactly happened?” He made sure to direct

his question to Emma since she appeared to be the only one telling the truth.

“We were at my OB’s for our first ultrasound.”

“Again?” Megan questioned by his side.

“Well, I only found out two weeks ago, and we wanted to wait to tell everyone until we had the

Megan’s blonde brows furrowed. “So what does the ultrasound have to do with Ankle hitting his

Emma pursed her lips and cut her gaze over to Aidan. “Would you like to tell them?” When he

shook his head and then winced, Emma sighed. “When they hooked me up to the fetal monitor,

they thought they heard two heartbeats. At the word ‘twins’, Aidan passed out and hit his head

on the counter and then the floor.”

While Pesh quickly turned a laugh into a cough, Megan wasn’t so thoughtful. She burst out

laughing. “You seriously passed out during the ultrasound?”

Aidan scowled at her. “In my defense, it wasn’t quite the ultrasound yet.” At Megan’s continued

Aidan turned to Pesh. “So am I going to stand around all day getting shit, or are you going to

Pesh nodded. “Of course. Your pupils are definitely a matter of concern.”

Glancing at Emma, Aidan said, “Just wait for me here.”

Pesh motioned for Aidan to go into the first examining room. As soon as the door closed

behind him, Aidan lunged for him, grabbing the lapels of his white coat. “I need a vasectomy.

Pesh fought the urge to laugh at the absurdity of the situation as well as Aidan’s desperation.

“Okay, let’s get you to sit down. You’ve obviously been through a lot of trauma in the last hour.”

Aidan plopped onto the examining table. He buried his head in his hands and groaned. “What

a fucking nightmare of a day.”

“Does your head hurt?” Pesh asked.

Pesh furrowed his brows. “What do you mean maybe?”


Aidan raised his head. “If you’re asking if I’m nauseated now, the answer would be no. I’m not.

But on the other hand, if you’re asking if I get nauseous thinking about the fact that Emma could

have been pregnant with twins, and I would have had three kids under two and in diapers…”

Aidan shuddered. “Then yeah, I get really fucking nauseous, and the room starts to spin a little.”